There were several genre offerings on the old idiot box this summer, so here’s a rundown of what I was watching. 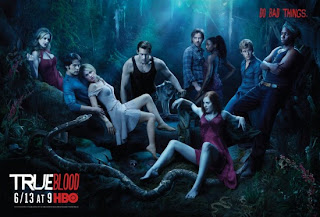 The third season of True Blood was excellent. They really expanded on the universe set up in the first two seasons and the power struggle between the duelling vampire courts of Mississippi and Louisiana was awesome. We also got more back story on the origin of Eric and just what the hell Sookie really is. It was great stuff this year with some solid cliffhangers leading into next season. 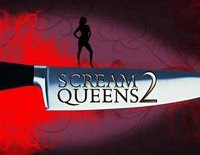 I pretty much said goodbye to reality television a long time ago, but Scream Queens is my one last vice. I looooooooooove this show. The second season just wrapped up a few days ago, with the victor winning a role in Saw 3D. I was upset that James Gunn didn’t come back for the second season – I actually got to tell him this when I met him & his lovely girlfriend Mia at a party during TIFF – but at least his conflict, the fantastic pseudo-superhero flick SUPER, was well worth it. Director Tim Sullivan did fill Gunn’s shoes admirably though. Replacing Shawnee Smith with actress Jaime King was a good idea too, as I thought she brought more personality to the show. She could be the ice queen in the Grand Ballroom, but still be helpful and articulate during the challenges. I don’t think, as a whole, I liked this crop of contestants quite as much as first season’s, but the challenges were certainly as entertaining. The best thing about this season was that my favourite actually ended up winning this time around.

This summer also had its share of duds. Persons Unknown started really strong with a compelling mystery, but the more they revealed, the less interesting it became. I couldn’t even make it through the entirety of its limited run before I tuned out. I think the only reason I stuck around as long as I did was that I got a kick out of seeing Kandyse McClure (Duala from BSG) playing a tatted-up lesbian death row inmate.

Happy Town was a disaster that pretty much disappeared after only a few episodes. I didn’t even get the make a call on whether to continue watching that one. I’m sure the appeal of Amy Acker & Sam Neill would have kept me around for at least half-a-season. 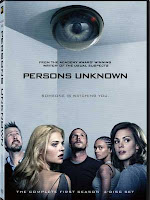 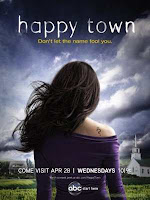 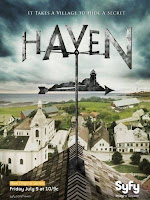 I gave Haven three episodes and then had to move on. I really wanted to support Emily Rose, as I love her as her virtual counterpart Elena Fisher in the Uncharted games, but I just couldn’t do it. The atrocious CG in the second episode just had me shaking my head. I think if this show was on ten years ago, I probably would’ve still been watching it, but I feel television – or at least my tastes – has moved on since then.

So, summer had its moments, but fall looks to be epic. Not only do we have the much-awaited fifth season of Dexter, but also the premiere of The Walking Dead on Halloween! Ah-mazing.

I was a bit disappointed that ABC gace up on Happy Town so quickly. They started the show when other shows were starting to wrap up for the season, so of course people won't give up on a show at that time to take in something new. After two episodes there was already talk of it being pulled, and of course the numbers for the third (and more so for the fourth) were already showing much lower numbers.

It wasn't a great show by any means, but I still enjoyed it. It had some interesting characters, and I would have liked to see where they would have gone with some of them. It is too bad networks don't give shows much of a chance to find its nitch these days.

Glad to hear I didn't waste any time watching HAVEN.

Hey Heather, good to hear from you! Yes, genre TV rarely gets a fair shake.