Well, that was a nice break after all that craziness. I certainly needed it. Let's see what been going on over the last week or so.
Ads of the Dead.

The other day Schwartz, of Cartoonandhorror.com, sent me this awesome vintage advertisement that he found on a horrordvds forum. 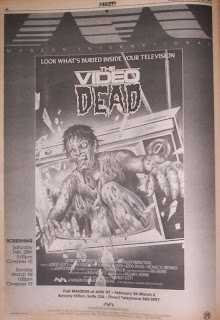 You might remember me talking about Squid Lid, a local band that played Rue Morgue's 100th Issue party back in May. Well, a video has appeared on the 'Net for their single Tongue Sandwich, which includes footage from that evening. See it below.

It looks like Michael Paul Stephenson's amazing documentary Best Worst Movie is coming to DVD through New World's Docurama Films. It is scheduled to hit shelves this November 16th. It looks like their really pushing it too, as evidenced by this little trinket I was handed while standing in line for Stake Land last week. 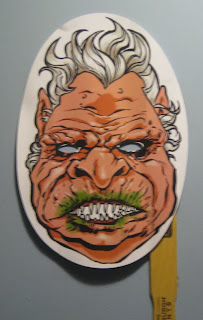 It looks like the little doc that could will continue to live on DVD, much like its subject Troll 2 has.
More Daywalt Cometh.

I've showcased many of indie filmmaker Drew Daywalt's shorts here, as they are some of the best bite-sized horror you can find on the Web. Daywalt is soon expanding his universe with the help of Fangoria and Dread Central. The legendary horror mag is facilitating his first foray into full-length feature terrortory with a vampire project called The Ringbearer. Also, his much anticipated web series Camera Obscura begins this Saturday, through Dread Central & Dailymotion and runs for twenty episodes. Here's the trailer and a sneek peek below.

For a recent interview with Daywalt about all his upcoming projects, click here. You can also check out his library of chilling shorts, over at his YouTube channel.

Get your gag reflex ready because Tom Six is about to give you another helping of his scientific abomination with The Human Centipede: Full Sequence. Here's the teaser below.
Posted by Jay Clarke at 9:30 AM