Death's Still Got It. 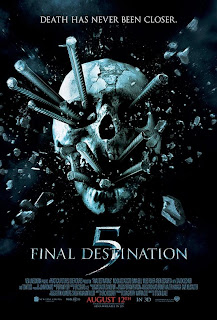 Due to Sam Lawton’s (Nicholas D'Agosto) premonition, a group of people avoid a deadly suspension bridge collapse. Soon after though, the survivors begin dying in freak accidents. Has Death come calling again?

So, here we are again. It seems like only yesterday I was posting my thoughts on Final Destination 4. When a franchise gets up to this point, you already know what you're getting, so it really just comes down to comparing the latest entry with all its predecessors. With that in mind, I can safely say I enjoyed this more than the 2009 incarnation, but it still didn't trump my personal fave, Part 2. 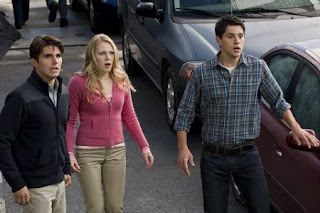 I felt the 3D was better utilized in this one, as well. You get your money's worth right up front with a fun opening credits sequence, with many of the implements of death from all the previous films smashing through glass at you, in slow motion. Perhaps this was an homage to the classic opening of Friday the 13th. Speaking of homage, there were many references to the previous Destination movies throughout, which made for a few chuckles. Also in the good column, was the solid disaster sequence. It was definitely the most ambitious of the series, even rivalling that the traffic accident in Part 2. I think the latter still has a slight edge though, with it being the more realistic and plausible of the two. As has been an increasing trend with the Destination movies, there is a lot of CG, but I think the important shots worked, and the stuff that didn't, well... No point in crying over spilt digital blood.

This movie didn't disappoint on its bread and butter, either. The deaths, especially the gymnasium set piece, are extremely memorable and will be sure to have you cringing. I know the laser eye surgery sequence has pretty much put the kibosh on me ever having it done. The formula of the series is followed, but the creators did add a few twists into the mix, which made me think they were at least trying this time around. Oh, and extra points for bringing back Tony Todd, who was conspicuously absent from the last movie (he was at least the voice of the roller coaster ride in Part 3.) 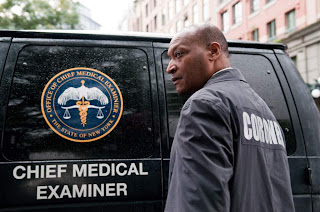 Good to have you back, man!

Not to keep knocking the fourth one, but five's ending was way more satisfying, with a closing credits sequence that puts all of the deaths from the previous movies into one bloody, operatic montage. This felt like the end all, be all of the series to me, but I'm sure if the price is right, there will be another. And as long as they keep entertaining me, I'll continue watching 'em.
Posted by Jay Clarke at 10:00 AM