Whew. That was an exhausting weekend! It looks like I’ll be splitting this post into pieces, as there is a lot of material to sift through. First off, I want to commend the Fan Expo organizers for how smoothly things went this year. They clearly learned from the distastrous mistakes made the previous year and took the necessary steps to prevent them from happening again. The larger space, extended hours and extra day spread out the affair and alleviated some of the congestion. So, mad props to the Fan Expo people on a job well done!

The first day was mainly just a get-in-get-out type of thing. I got my pass, looked around for a bit and then headed off to the Near Dark screening at The Toronto Underground. 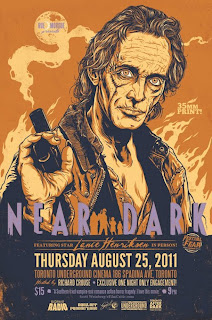 It was a lot of fun, even if it wasn’t the 35mm print that was promised. You know, I always forget how fantastic the ensemble is in that movie. These are the kinds of bloodsuckers that vampire flicks need to be populating their movies with. Then there is Near Dark's formidable style, proving that Kathryn Bigelow was a Grade A filmmaker from the get-go, not just when the Academy decided to acknowledge her.

Following the screening, Toronto film critic Richard Crouse brought out Lance Henriksen to talk about his experiences while filming. Henriksen talked about how matriarchal Bigelow was as a director, and his close friendship with Bill Paxton. The two of them got so into their roles, they even wrote another Near Dark script. He also told the story – which I’d heard last year, but never tire of hearing him tell it – about testing out his Jessie character on a unwitting hitchhiker he picked up late one night. 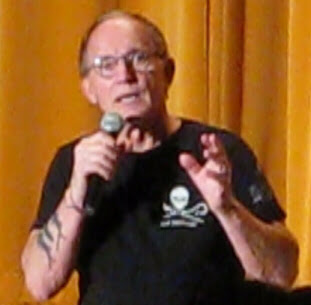 Lance's opinion on the current state of cinematic vampires?

Other stories that came up were about him working for a director that used to talk to stuffed animals on set and how he once was abandoned in the desert with three potatoes and a book of matches. It was great stuff like this that reminded me that I still have to read Lance’s book, Not Bad For A Human. 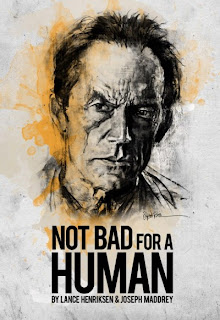 At the tail end of the Q&A, Crouse brought up Michael Biehn, who happened to be in the audience. He was apparently offered a role in Near Dark, but turned it down. Of course, now he was quick to admit that he made a lot of mistakes as a young actor. When someone asked what he’d done instead, he said;

Biehn then went onto say that he almost didn’t take the role of Kyle Reese in The Terminator either because his agent basically sold it to him as;

"A movie directed by the guy who got fired off Piranha 2, starring the bodybuilder Arnold Schwarzenegger, about a robot coming back from the future to kill this girl that works at a burger joint." 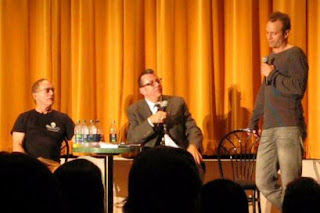 However, he was clearly enthusiastic about the two projects he was promoting at the Expo. He is part of a really strong ensemble in Xavier Gens’ new film The Divide. Biehn described the movie as Gens’ “fuck you to Fox” after the director's unpleasant experience working on Hitman in 2007. Biehn also talked about another project called The Victim, which he had full control over.

It was a solid night.

On the second day of the show, I got some more time to walk the floor. Even though the space dedicated to horror seemed a tad smaller this year, there was still no shortage of things to do.

Now that the Toronto After Dark Film Festival has moved back to October, they took the opportunity to announce the first eight titles of this year’s programme. 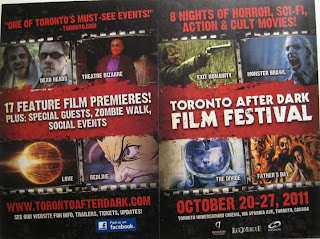 Even though Vagrancy didn’t have a booth this year, they still had flyers around trumpeting their very solid 2012 Shock Stock event. 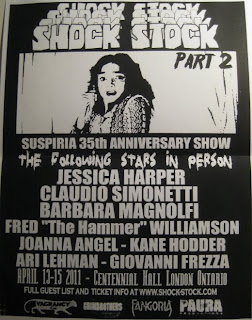 Twisted T’s had some new designs this year, including The Gate, Slaughter High and The Beast Within. 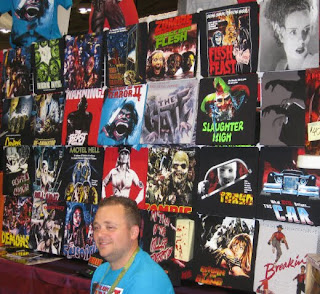 Full Moon & Troma were out in full force again 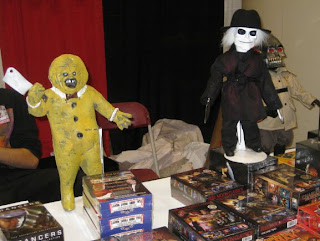 Then I saw some familiar faces walking around the floor. 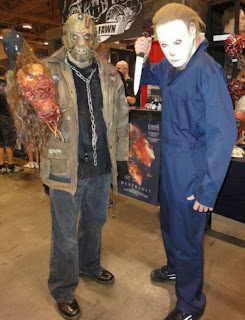 Seizing the opportunity to get some shopping done, I quickly made some acquisitions. 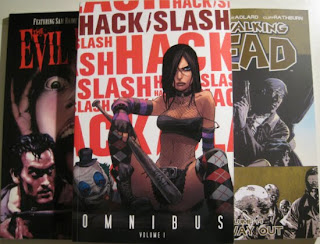 Still waiting on that Scarlet trade though.

The first panel of the day was Elvira, Mistress of the Dark. After seeing actress Cassandra Peterson appear a few years ago, it was cool to see her this time as the persona that made her famous. Either way, she still looks great.

She talked a lot about her career, and how the name ‘Elvira’ was literally picked out of a hat before they started shooting that first day.

When somebody asked her about her longevity, she replied it was because of Halloween. She is always doing something when that season rolls around, so she’s sort of become synonymous with it. 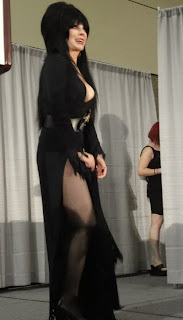 She also talked about turning down an offer to pose in Playboy. Before making a decision, she polled her fans at a convention and was surprised to see that the majority of them were against it.

She also said that the latest incarnation of Movie Macabre went very well with the DVD’s releasing this October. 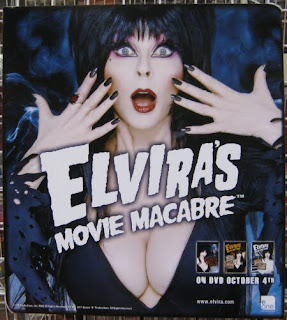 Right after Elvira was actor, director and make-up man Tom Savini. I’ve seen him in person several times now, and he’s always lively and willing to answer a lot of questions.

He talked about starting out and hounding effects legend Dick Smith for the tricks of the trade. This led to him getting jobs in the mid-seventies, shortly after coming back from Vietnam.

When asked the inevitable question about what he thought of CGI, Savini said he didn’t mind it.

“I think the best stuff out there now is when visual effects are used in combination with the practical.” 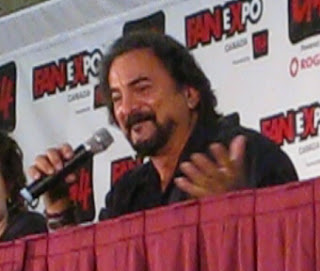 Savini was of the opinion that CG can work, but Hollywood is still in the process of reprogramming us to accept it.

"When me and guys like Rick Baker were doing stuff, it was all there in front of you and required no effort from the viewer to believe it. With CG, you have to pretend that what you are seeing is real."

Someone asked Savini what his most dangerous stunt or effect was and he said that apart from his high fall in Dawn of the Dead, there was a bit in Texas Chainsaw Massacre 2 that left little room for error where he was cutting through a fake head held by his assistant.

Savini then talked about his mysterious disappearance from the end of Machete. His death scene was shot, but apparently cut from the film because director Robert Rodriguez wanted to bring him back for Machete 2.

Savini also revealed that he was supposed to play the villain opposite Antonio Bandares in The Mask of Zorro, back when Rodriguez was still attached to direct.

From there I took off to check out Don’t Be Afraid of the Dark and well, you know how that went. Check back tomorrow for Part 2 to hear about Saturday’s exploits.
Posted by Jay Clarke at 10:03 AM