I realized it has been a while since I've touched on the video game side of things, so here's what genre offerings I've been spinning on my old PS3.
First and foremost, I was ecstatic to see what was waiting for me on the PSN when I got back from Fantasia. I had been hoping desperately that Limbo, last year's XBLA darling, would be ported over to the Playstation at some point, and my wish finally came true. Limbo was definitely the game that made me the most jealous of the Xbots out there. The Call of Duty zombie levels kind of scratched my Left 4 Dead itch, Heavy Rain subbed for Alan Wake, and don't even get me started on Dead Rising, but Limbo looked like something really special. Anyway, finally getting my hands on it was a fantastic surprise. And boy, was it everything I wanted.

I likely don't have anything new to add to the universal praise this game received – even topping some critics' 2010 Game of the Year lists – but I'm going to heap some on anyway. Limbo is about as delightfully pure a gaming experience as you can get. The mechanics & aesthetic are brilliantly realized, and yet so simple. What also amazes me is how the developers managed to achieve the perfect level of difficulty. There were a few sequences, where I was sure it was impossible and I'd have to take a break. Then, coming back to it fresh, I would always inevitably have that 'Eureka' moment and move onto the next obstacle. Figuring out the really challenging puzzles in this game was such a satifying experience, and really took me back to my teens when I was playing Sierra's Quest games and Eric Chahi's Another World, for which Limbo almost seems like a spiritual successor. The fifteen-dollar price tag is steep for DLC I know, but it is so so worth it. I found myself playing through it again almost immediately. And due to Limbo's uncomplicated interface – move, jump and grab are the only controls – you could even initiate non-gamers into participating. This is a must buy as far as I'm concerned.
It took me a while, after being sidetracked by LA Noire & Infamous 2, but I finally getting around to downloading the Call of The Dead DLC for Black Ops. It is cheesy fun, but it is not really offering anything new in terms of gameplay. I would've liked the option to choose your characer (Buffy FTW!) and the difficulty curve kind of makes it impossible to play solo, but it is still a pretty cool add-on. I certainly never thought I'd be playing an FPS where George A. Romero would be chasing me around with a 1K, that's for sure. 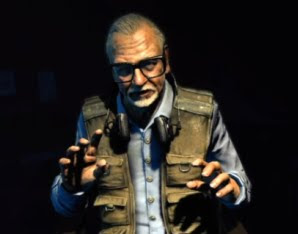 Lastly, I just wanted to mention this bizarre title called Catherine. I am aware that the Japanese produce all manner of crazy games that never make it across the pond, so maybe this is some sort of Western market experiment. I think what initially piqued by interest was the art style, which reminds me of the films of Satoshi Kon, but man, is this game not the weirdest fucking thing I've ever come across! I downloaded the demo and it left me no less perplexed. It seems to be this weird hybrid between dating sim and some gruesome Hi-Def rework of Qbert.

You can't really tell by that trailer, but I swear there is a game in there somewhere. Catherine has me oddly intrigued, but not sixty-dollars intrigued.
Posted by Jay Clarke at 12:35 PM