Don't Be Afraid Of The CGI. 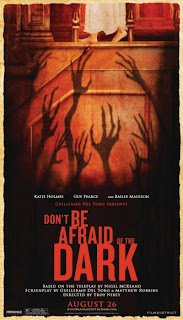 Sally (Bailee Madison) is sent to live with her father & stepmother (Guy Pearce & Katie Holmes) in an old mansion, and soon discovers there are creatures within that may not be as friendly as they pretend to be.

Don't Be Afraid of the Dark was a frustrating experience. So many things about this film are top notch. Everything from the production design & cinematography to Marco Beltrami's score is exceptional. I could see Guillermo Del Toro's influence almost immediately, as it has many of the qualities inherent in contemporary Spanish genre cinema, most notably Pan's Labyrinth and The Orphanage. This movie also has a great cast – though Holmes was given little to do and Pearce even less – and considering how much of the movie was put on the shoulders of young Madison, I think she did an admirable job. The filmmakers had a good foundation built here. And then the CG creatures show up and the whole thing comes crashing down. 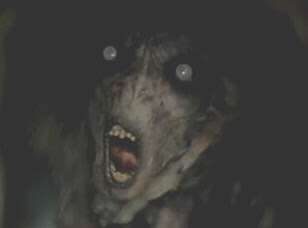 And you know, it wasn't even bad CG; it just WASN'T SCARY. To me, that's a fundamental problem when that's what I was promised. I mean, it's in the friggin' title! Too much CG kills a movie like this, but it is also how you utilize it. The Orphanage had over a hundred digital effects shots, but you barely noticed them because they were so well implemented. In Don't Be Afraid of the Dark, it seems the further the movie goes along, the more overtly they trot them out. I mean, the little guys in The Gate were scarier than these fucking things. 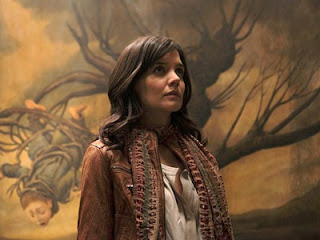 The frustrating thing is that Don't Be Afraid of the Dark starts out really well, with a sequence that it sure to have you cringing, but the only other effective bits were exposition scenes. Holmes is shown drawings of the creatures and those were actually creepy because they're tactile and not created in a computer. However, even when forgiving the pervasive CG, there is just an emptiness here. The Spanish efforts that I spoke of before always brought a lot of heart, and effortlessly built a connection with their audience. There was none of that here. Even with the great performance put forth by Madison, she is initially portrayed as a petulant brat and perhaps plays along with her “new friends” a little longer than she should've before realizing they didn't have her best interest at heart. And I have always liked Katie Holmes, but let's face it; she is no Belén Rueda. Lastly, I really didn't care for how things played out at the end. The characters' acceptance of the events that transpire seemed false and the last little reveal was confusing to me.

The recipe for success was there, but then someone in the kitchen decided to mix in some artificial ingredients and spoiled the whole meal. It's a shame, as I was really hoping Don't Be Afraid of the Dark was going to extend Del Toro's impeccable record.
Posted by Jay Clarke at 10:09 AM

I'm still looking forward to seeing it, although when they revealed the creatures in the commercial it kind of made me groan. I think they would've done so much better to not show the monsters in full view. At least limit it until a final reveal at the end. Instead they show practically everything before you even get to see the movie!

Completely agree with everything you just said. If I didn't know Guillermo was involved I would have thought it was someone else trying desparately to copy Guillermo's style.