It’s been a long road for Tucker & Dale vs Evil. After seeing its first screening at Sundance over a year-and-a-half ago, it finally played Toronto last week. 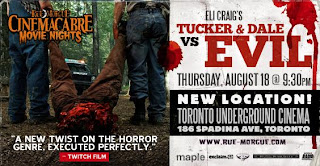 A couple of easy-going rednecks (Alan Tudyk & Taylor Labine) are mistaken for inbred psychopaths by a group of vacationing college kids.

I had a fun time with Tucker & Dale vs Evil. As you can no doubt tell by the trailer, the movie does recycle the same joke over and over – obstensibly making it the Three’s Company of horror comedies – but I still found it entertaining. The role reversal device within its stretched out premise is an interesting one and mixes well with the splatstick. There are moments that the movie dragged to be sure, though I felt that the movie ultimately succeeded because of Tudyk and Labine. They worked well together, had great comic timing and were the main reason why the theatre was still full of laughter – and not crickets – an hour in. I like Tyler Labine. I recall his tiny, yet memorable appearances as a stoner on The X-Files and I’m glad he’s made the big time – you can also see him in the recent Rise of the Planet of the Apes – because he’s very likable onscreen. 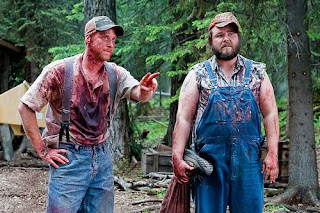 The fact that this movie sat on the shelf for so long only serves to its detriment and that’s a shame, as making horror fans wait this long only leads to overhype and raised expectation. While I don’t think Tucker & Dale vs Evil is anything spectacular, it is really hard not to like. It’s wholly inoffensive, sometimes charming and the protagonists are lovable losers. It is also one of those movies that is best viewed in a group environment. Throw it on at your next party for shits & giggles, and see if you don’t have one or two people grinning like a banjo boy.
Posted by Jay Clarke at 12:37 PM