Seeing The Tower the other day prompted me to learn more about the company that could have spawned such a “special” film. Here is the intro for Emmeritus Productions.

Emmeritus was a Hamilton, Ontario based company that made ultra-low budget features for local television station CHCH during the 1980’s. When I looked them up on Imdb, I was elated to find they had quite the catalogue, many of which I remembered from my coverbox browsing days. Boasting titles such as Shock Chamber, Blue Murder, The Hijacking of Studio 4, Ladybear & Niagara Strip, how can my interest not be piqued? You can be sure I will be actively searching for anything from these guys from now on. 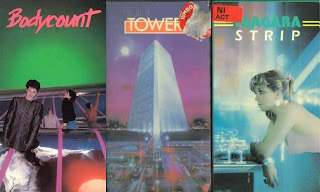 For more info on Emmeritus, check out this awesome article about them on Canuxploitation.com, which includes several coverboxes and a promo video.
Posted by Jay Clarke at 10:02 AM