Last Friday night was the Suspect Video twentieth anniversary party, and it was a blast. 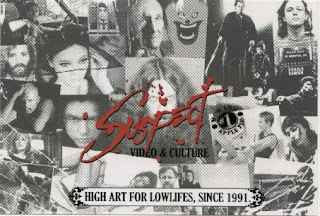 For those not initiated in the Toronto video store shrine, writer John Semley wrote a fantastic piece about it (which you can read by clicking here) but if you've stopped in here with any regularity, I'm sure you've heard me talk about them. Suspect – and others like Queen Video – were instrumental in making me the movie geek I am today. Once I had exhausted all my suburban sources and I was old enough to venture out into the 'big bad city', I made the pilgrimage to Suspect; a beacon of all things obscure and esoteric. I remember being so overwhelmed those first few times that I had to bring a list on subsequent visits to keep from being hypnotized by their humongous selection. This was, of course, the Queen street location – which sadly burned down in 2008 – as I wasn't aware of the flagship Markham St. store until I started frequenting the nearby Bloor Cinema.

The party was great and I got to hear many cool stories from the owner, Luis Ceriz. I had to duck out for a bit to check out Freddie Francis' The Deadly Bees, which was screening at Trash Palace. When I was leaving, a guy I met told me Francis was also the director of Girly, a movie I remember fondly from my own video store days. Girly was a weird British horror about a psychotic family that often referred to themselves in the third person. So, now I was even more excited to see The Deadly Bees. And I wasn't disappointed, as it was the perfect amount of cheese. I mean, a convalescing pop star trapped on an island inhabited by two feuding beekeepers?! If that isn't a recipe for awesomeness, I don't know what is!
When I got back to the bar, the party was in full swing. It was very cool to see this tightly knit community all together in one place, celebrating Suspect's storied history. Say what you will about how the brick-and-mortar video store is doing the death dance, but there is a social component to places like Suspect and Eyesore Cinema, that you just can't get online. Why, just a few hours before, I stopped into Suspect and overheard the guy behind the counter, a very energetic young lad named Eastern, regaling a customer about the intellectual merits of Transformers 3. 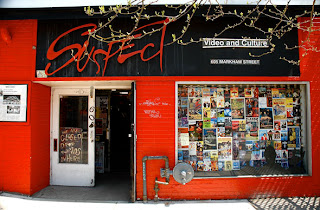 Yep, it was a fun night. Now, I've just got to decide what I'm going to get with my recently acquired free rental. What do you think? Nunsploitation? Some Japanese Pink? Maybe something Italian? The sky really is the limit.
Posted by Jay Clarke at 10:03 AM