The Lost Reviews: Acts Of Death

The Lost Reviews are a group of articles I wrote for the site DVDWolf that, for whatever reason, were never posted. This Acts Of Death review was originally written in August 2007. 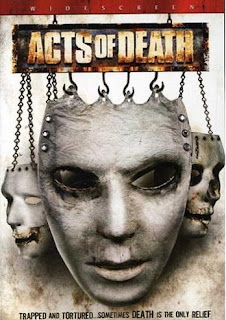 When one of the students at a drama class initiation ends up dead, the guilty parties frantically dispose of the body and then pretend nothing happened. Unfortunately for them, someone knows their dirty little secret and is picking off those involved one-by-one.

Acts of Death (aka The Final Curtain) is one of those movies that have an hour’s worth of material stretched out to ninety minutes or, in this case one-oh-three. The setup did not need to take as long as it did and there must have been at least twenty minutes of people wandering around the campus hallways. There are huge logic leaps and the movie isn’t helped by its ridiculous conclusion that plays out like a rejected Scream 4 screenplay. The movie isn’t all bad though. Director Jeff Burton knows what he’s doing visually, the score by John Roome is good and there are some decent gore set pieces, it just takes forever to get to them. Even the cast, for the most part, is better than you would expect and Reggie Bannister (of Phantasm fame) appears as the crusty campus security guard. At first I thought good ol’ Reg was hamming it up, but then character actors Glenn Shadix and Raimi cohort Billy Vincent came onto the scene. I swear I thought I saw bits of scenery in between their teeth. I pledge that the next time my boss asks me something, I will give him a cold stare and remark “It’s been -- (painfully long pause)