The Lost Reviews are a group of articles I wrote for the site DVDWolf that, for whatever reason, were never posted. This review for Dead & Breakfast was originally written in March 2006. 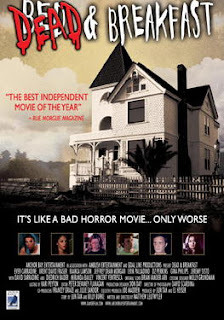 Note to Marketing. If you are going to compare yourself to the bloodiest of gore flicks like Peter Jackson’s Braindead, you better damn well deliver. It’s a shame really. Ever Since Sam Raimi practically invented the splatstick genre with Evil Dead 2, the Americans have been rapidly falling behind their overseas brethren. Dead & Breakfast starts out fine with an interesting credit sequence and a serviceable cast that includes Gina Phillips, Ever Carradine and the ubiquitous Jeremy Sisto. The gags and one-liners start early, hitting and missing at a frenetic pace and a wasted cameo by David Carradine doesn’t help matters. The rockabilly segue device that is amusing at first becomes as awkward and out of place towards the end as it was in There’s Something About Mary. Michael Mosher does a nice job with the splatter, but even the Grand Guignol chainsaw finale is nothing to write home about. To his credit though, for every bit that is nabbed from the movies that inspired him, director Matt Leutwyler comes up with some fresh ideas himself. The Kuman Thong box with its soul trapping and possession abilities opens up whole new avenues for a sub-genre that rarely sees innovation. So basically you have a movie that is fun in parts, silly in others and ultimately doesn’t quite live up to the major hype it manufactured for itself. Though Dead & Breakfast has grown on me with subsequent viewings, I still say that Jake West’s Evil Aliens and the much maligned Undead by the Spierig Brothers are better offerings.
Posted by Jay Clarke at 12:00 PM