The Lost Reviews are a group of articles I wrote for the site DVDWolf that, for whatever reason, were never posted. This review for Bug was originally written in September 2007. 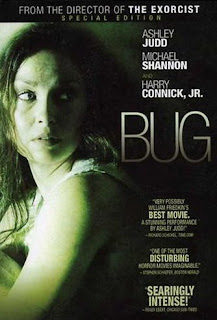 Agnes White (Ashley Judd) has her lonely and boring existence torn asunder when she strikes up a romance with a shy stranger. She is reluctant to believe his theories about government conspiracies and the bugs he sees everywhere… until she starts to see them herself.

Bug is a tight little character piece and its roots as a stage play are immediately apparent. Judd gives a flawless performance as the lonely barmaid that becomes the victim of extreme paranoia. Michael Shannon, who plays the mysterious male lead Peter (who also played the character in the off-Broadway production and was cast for the movie after much reluctance from the studio) is so totally invested in the character, it seems as natural as reality itself. As the insanity between these two escalates, so do their performances. Director William Friedman does an impeccable job of letting the material tell the story and keeps his presence to a minimum throughout. Bug is a perfect example of a film that does so much with so little. It has four characters - including Harry Connick Jr. in another stellar supporting role - all played beautifully and dialogue, rather than action, drives the film. It is a fine curiosity that paints a frightening picture of the infectious traits of fear and paranoia.

The DVD comes with two featurettes and a commentary with director Bill Friedkin. The first featurette is a fairly standard making of called Bug: An Introduction. It features interviews with the cast and crew and focuses mainly on the challenges of adapting Bug from the stage and working in a confined space. The second featurette is really what is worth watching. It is a lengthy sit down interview with William Friedkin. The interviewer asks him questions that run the gamut of his career and delves into his love of opera, how he picks his projects and what he really gets out of filmmaking. An important point Friedkin makes (one I’ve been saying for years) is how the pacing of films has changed over the years due to the shortening attention spans of not only audiences, but also filmmakers. After watching this doc, I was quite looking forward to the commentary, but it was not what I was expecting at all. Friedkin doesn’t really go into detail about the production, but rather gives us a running narration. It’s totally unnecessary and not what I watch a commentary for, so that was disappointing.