The Lost Reviews are a group of articles I wrote for the site DVDWolf that, for whatever reason, were never posted. This review of Brutal was originally written in July 2007. 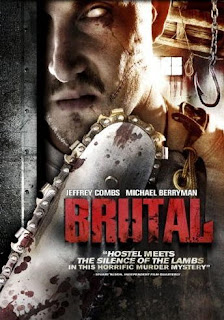 When someone starts cutting out the hearts of women in a small town community, a deputy takes it upon herself to conduct her own investigation. Little does she know that she may have in turn, made herself the killer’s next target.

Looking at this box cover, I immediately thought ‘Oh crap, what am I in for now?’ You can imagine my surprise, when I was stunned to discover that, you know, Brutal isn’t half bad. It has an eighties slasher feel to it, with a pinch of comedy that even had me chuckling a few times. Brutal is, dare I say it, actually clever in some parts. The cast is good, as well. Jeffrey Combs is great (but then, isn’t he always?) as the town sheriff and looks excited just to be out of his lab coat. Angel fans will recognize Sarah Thompson as the naïve deputy and Michael Berryman plays a supporting role where he’s not only a good guy, but also kind of a hero! Now, I may be talking this film up because I had zero expectations, but I must say that while I was watching this so-called slasher, a strange thing happened. I found myself as interested in everything else as I was in the gore set pieces. Also odd was that the setups were more satisfying than the payoff itself. The DVD cover, which I might add looks like it’s for a completely different movie altogether, hails Brutal as “Hostel meets Silence Of The Lambs”, but that's not accurate at all. If anything, in story and structure Brutal reminds more of 1989’s The January Man, but gorier, of course.

For a direct-to-DVD release, Brutal has a quite a lot of extras. There is a lengthy behind-the-scenes featurette and a still gallery. There is also a commentary with director Ethan Wiley. It’s pretty in-depth and considering he is by himself, he holds his own. He talks at length about how wildfires threatened the shoot on several occasions and that Brutal is a prequel to his 2006 movie Blackwater Valley Exorcism, in which some of the same characters appear.