The Lost Reviews are a group of articles I wrote for the site DVDWolf that, for whatever reason, were never posted. This review for P2 was originally written in November 2007. 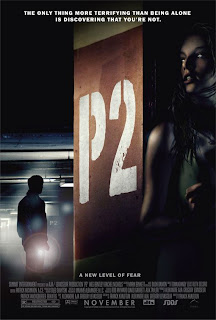 Angela Bridges (Rachel Nichols), after having worked late, accidentally gets locked in an underground parking garage on Christmas Eve. To make matters worse, she soon finds herself being stalked by a maniacal security guard (Wes Bentley).

I walked into P2 knowing very little about it except that Alexandre Aja and Greg Levasseur, the pair behind High Tension - a film I’ve always had a soft spot for – were involved. In fact, the director is Franck Khalfoun, who you may remember as Tension’s ill-fated gas station attendant, Jimmy. P2 is a simple, taut and bloody thriller that was much better than I was expecting. At its core, it’s still a fairly standard thriller, but it also has a sprinkling of black comedy that the two leads play completely straight. This makes for a weird mix and the only reason I think it works is that Nichols and Bentley are fully invested. There are several cool little bits – a lot of which are glimpsed in the trailer unfortunately – that make it a fun ride. P2 is also surprisingly gory. I suppose I should have expected that considering the source, but its handful of set pieces will certainly keep the gorehounds contented. P2 is a solid renter. It is nothing spectacular, but definitely better than some of the stuff I’ve seen in wide release in recent months *cough Captivity cough*.