The Lost Reviews are a group of articles I wrote for the site DVDWolf that, for whatever reason, were never posted. This review for Sunshine was originally written in July 2007. 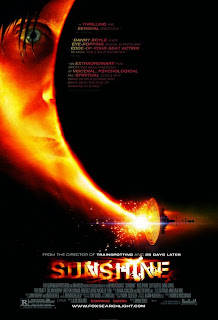 Fifty years in the future, our sun is dying. When the first spaceship sent to re-ignite the sun disappears, a second is launched. These eight astronauts are the last hope for humanity.

Sunshine is a terrific example of straight up science fiction. Director Danny Boyle and writer Alex Garland sidestep the pitfalls of humour and romance – which lesser filmmakers would use as a crutch – and just give us the goods. The look of the film is spectacular, channelling other classic films that obviously inspired it, like 2001 and Alien. The dull, metallic hues inside the ship are in complete contrast to the bright colours of the imposing sun. The visual effects in space are as good as anything I’ve ever seen and made the approaching star seem like its own character. I never once felt like I wasn’t out on that spaceship with them. Sunshine also sports a fine ensemble cast including Cillian Murphy, Chris Evans and Michelle Yeoh. The absence of a big name serves the script well because every character is on equal ground, with no lines of gender or race. The film is, as Boyle puts it, “just eight astronauts strapped to the back of a bomb”. The one thing I especially appreciated about Sunshine was the trailer only revealed the setup. The whole second half of the movie is a complete surprise and the story unfolds for you without any preconceived notions. I can’t remember the last time I wasn’t spoon-fed the entire story in a trailer – maybe M. Night’s last one, but Sunshine didn’t turn out to be shit. There are several sci-fi films that Sunshine is reminiscent of, but it also never seems like it’s not its own entity. There were some weird editing choices towards the end that made the climax a little hard to follow, but overall Boyle should be very proud of his first foray into science fiction.
Posted by Jay Clarke at 12:00 PM