The Lost Reviews are a group of articles I wrote for the site DVDWolf that, for whatever reason, were never posted. This review for Rhinoceros Eyes was originally written in September 2003. 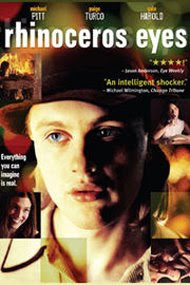 The main strength of Rhinoceros Eyes is that it is perfectly cast. Michael Pitt - who up until this point I always thought of as a poor man’s DiCaprio - really comes into his own as the protagonist Chep, mixing good comic timing with the sincere awkwardness of an introvert. Paige Turco is as lovely as ever as Fran, the object of Chep’s affection. The comic relief side story provided by Bundy (Matt Servitto), Hamish (James Allodi) and Sweets (Victor Ertmanis) is amusing and succeeds in breaking up the strangeness that marks the rest of the film. The most fascinating character is the sprawling prop house itself. The countless relics that stock the shelves come to life with the use of stop motion animation, growing larger and more human each time they appear to Chep. These exchanges are very reminiscent of the giant bunny sequences in Donnie Darko. The inclusion of the Toronto movie house The Royal in the film is also a stroke of genius as the ultimate festival moviegoer in-joke. Another great thing about the film is that you never really know where it’s going to take you. There were several occasions where I thought to myself, ‘where did they come up with that?’ The influence of David Cronenberg (who is actually Eyes director Aaron Woodley's uncle) cannot be missed here, particularly Naked Lunch and eXistenZ. The decision to use both digital film and 35mm is an interesting one. Although this is largely a dimly lit film, the colours of the prop house still come through beautifully. To my knowledge, Eyes is also the first film to combine stop motion animation with the digital format. Rhinoceros Eyes is an imaginative effort that is never pinned down to a single genre.