The Lost Reviews: Stir Of Echoes 2

The Lost Reviews are a group of articles I wrote for the site DVDWolf that, for whatever reason, were never posted. This review for Stir Of Echoes 2: The Homecoming was originally written in November 2007. 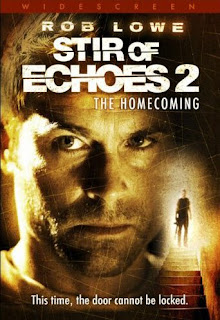 After being injured in the line of duty, National Guardsman Ted Cogan (Rob Lowe) returns home and begins seeing visions of the people whose deaths he felt responsible. Are they hallucinations, or are the dead trying to send him a message? For the sake of his family and own sanity, he struggles to find out what the ghosts want. But, at what cost?

I’m going to say right up front that I did like Stir Of Echoes 2: The Homecoming, even though it’s a fairly by-the-numbers thriller with standard jump scares that we’ve seen a hundred times before. Without even knowing that it was made for TV, I could tell that it was. That’s not necessarily a knock; it’s just that sometimes you can tell, you know? However, following a formula isn’t such a bad thing if it’s executed well. The first scene does a good job of setting up the scenario and unfolds in a timely fashion from there. Watching The Homecoming, I found myself thinking that it definitely had an Asian horror vibe, even though it was pretty much just emulating the style and structure of its predecessor. Isn’t that curious, considering that the original came out before the Asian horror craze hit. It’s not as flashy or well written as the Kevin Bacon incarnation, but Rob Lowe’s more dialled down portrayal of the protagonist seems to make this one a little more 'realistic'. In addition to the themes of revenge and redemption, there is also a sprig of racism, which keeps the movie feeling very modern. The Homecoming is one of those movies that are good for those couch bound Sunday afternoons. Not something you would seek out, but if it were to come on TV, the end credits would roll and you’d think to yourself, 'you know? That wasn’t half bad.'

The DVD has a few extras, including a featurette, deleted scenes and a commentary track. The featurette is mainly the two leads (Lowe and actress Marnie McPhail) and director Ernie Barbarash talking about what they were trying to accomplish with this second installment. The commentary with Barbarash and editor Mitch Lackie is pretty dry, focusing mainly on the editing process, shooting in Toronto and their love of the first film.
Posted by Jay Clarke at 12:00 PM