The Lost Reviews are a group of articles I wrote for the site DVDWolf that, for whatever reason, were never posted. This review for Haunted Boat was originally written in July 2007. 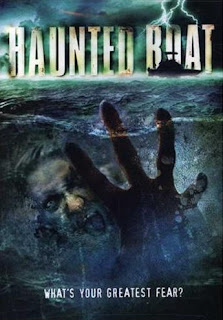 When a young man inherits a boat from his late father, he and five friends go out for a weekend trip on the ocean. When tragedy strikes, their worst fears start to manifest themselves in physical form.

Right off, the first act of Haunted Boat is atrocious. My DVD player actually rebelled against it and froze up. I should have quit while I was ahead. To give you an idea of what I was dealing with, let me give you a sample of one of the romantic interludes. A man and a woman are standing at the head of the boat. There is a long pause as they stare out over the water. Then the guy looks over at the girl and says, “Yep, it just doesn’t get any better than this.” Are you kidding me?? When the characters started playing Strip Spin the Bottle, I thought things might be looking up, but it wasn’t meant to be. This is when Haunted Boat starts going in all these crazy directions for no other reason than to fill time. Seriously, with all the musical montages and useless asides, this movie could have been half as long. The best is when they decide to search the boat and it takes five minutes of screen time even though the vessel is no bigger than my living room. Then, they decide to tell each other scary stories. The sad thing is, these bits are better than the actual movie. I have to give a special shout out to Mathew Fox (NOT Jack from Lost, though I’m sure you figured that) for his stirring performance as Simon. His appearance signals Haunted Boat really going off the rails. With his wide eyed, yet deadpan delivery no matter what the line, was I really supposed to watch this scene with a straight face? I’m fully aware of what Simon was supposed to represent, but oh my Lord! From there, the third act is just a downward spiral into incoherence. This movie is totally banal and I’m not blaming the low production value either. It just wasn’t engaging. If I was afraid of floating heads and sharks that look like CG carp, then maybe you might have gotten something out of me. I’m sorry, but anyway you look at it, Haunted Boat is just a fuckin’ wreck.
Posted by Jay Clarke at 12:00 PM