The Lost Reviews are a group of articles I wrote for the site DVDWolf that, for whatever reason, were never posted. This review for Joshua was originally written in July 2007. 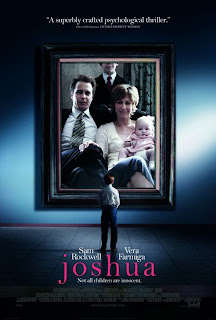 Life seems to be going well for the Cairns. Brad (Sam Rockwell) and Abby (Vera Farmiga) are well off, have a gifted son Joshua and a new baby daughter. When things start to go wrong, the parents start to suspect that their nine-year-old is not as perfect as he appears.

Joshua seems like fairly standard fare, but cleverly doesn’t show you all its cards up front. It’s a slow one (in fact, during the first act I thought this movie might just be ninety-minutes of piano playing and babies crying), but doesn’t bore. Rockwell and Farmiga are solid and the anchors of the piece, especially the latter because there are parts in the film where I wasn’t sure who was more unstable – the boy or his mother. As for newcomer Jacob Kogan as the title character, I can’t really pass judgment because I’ve never really been a good judge of child actors. Unless we’re talking extremes like the stinkage of Jake Lloyd or polar opposite Dakota Fanning, I tend to just see them as part of the scenery or a device to move the story forward. All I can say is that Kogan accomplishes that. Something I was aware of though, was the fine score orchestrated by Nico Muhly. It had a very old school feel that reminded me of the stuff that Kubrick used to employ. Joshua does tend to skirt the comical – whether intentionally or not – in the third act, but manages to hold it together. Apart from being a PSA for birth control, Joshua is a subtle thriller that may find some success on DVD.
Posted by Jay Clarke at 12:00 PM