The Lost Reviews are a group of articles I wrote for the site DVDWolf that, for whatever reason, were never posted. This review for Dark Wolf was originally written sometime in 2003. 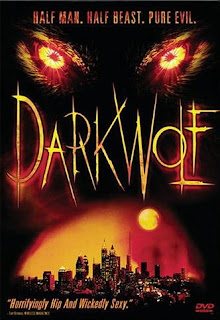 Dark Wolf is a testament to how bad CGI can destroy a movie. I watched Cube 2: Hypercube right before this and thought some of the CGI in that was a little shoddy, but compared to Dark Wolf, Cube 2 looks like The Matrix. Seriously, the transformation scenes look worse than the stuff on early episodes of Hercules: The Legendary Journeys. The only reason I really picked this one up at the video store was because of Samaire Armstrong. She caught my eye in a ninth season X-Files episode, so I remembered the name. She has a Rachel Leigh Cook-like quality to her. Kane Hodder also makes an appearance as the human form of the Dark Wolf. It’s been so long since I’ve seen Hodder, I almost didn’t recognize him. There was just enough T&A and gratuitous gore to keep me from reaching for the eject button, but this movie isn’t fit for man or beast.

Even though there are several special features on this DVD, I had to pack it in halfway through the making-of featurette. The enthusiasm of the crew made it sound like they had reinvented the wheel. Did you SEE the finished product?? Loyal readers, you’d be better served by watching American Werewolf In London or Ginger Snaps again rather than wasting your time on this.