The Lost Reviews: May

The Lost Reviews are a group of articles I wrote for the site DVDWolf that, for whatever reason, were never posted. This review for May was originally written in August 2003. 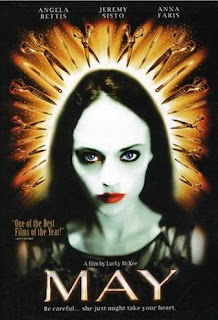 I finally got around to checking out Lucky McKee’s May this week and was glad to see that all the hype I had been hearing over the last few months was not unwarranted. The strength of this piece is largely due to Angela Bettis’ performance as the terminally lonesome title character. Her wonderfully deep portrayal is quite compelling and though the last act turns a corner into the realm of tongue-in-cheek, it doesn’t make her character any less tragic. Bettis is complimented by a strong supporting cast including Jeremy Sisto, James Duval and Anna Faris. I must say it was great to see Faris outside of the Scary Movie franchise and as a racy lesbian no less! The film balances these well fleshed out (pardon the pun) characters with some excellent imagery. May is filled with Dario Argento references to the point you’re almost saying “okay, Lucky, we get it, you're a fan.” I can’t fault him too much, though. If I were making a movie, I’d probably do the same thing in the spirit of that anecdotal Craven/Raimi sub-reference melee of the eighties. I thought the cracking of the glass case containing Susie, May’s doll and only friend was a clever use of symbolism and really liked how the narrative would set up characters that were off-kilter (Sisto’s character Adam has an affinity for violent cinema and Duval’s Blank is a rebellious punk) and attracted to May’s awkward innocence, yet once her ‘weird’ behaviour is revealed, they quickly shy away. I often wonder how I would react in a similar situation. I surround myself with all things grotesque, but if I were confronted with someone truly abnormal, would I be intrigued or run for the hills? May is yet another Lionsgate release (I love these guys) that is well worth checking out.

The surround sound of the DVD is fully utilized. The cracking glass and soft whisperings of Susie can be heard all around you. The DVD’s lack of special features is disappointing, but there are two commentary tracks. The first - and superior - one involves McKee and Bettis, as well as D.P. Steve Yedlin and editor Chris Sivertson. In addition to Argento, McKee mentions some more of his many influences, including Scorsese’s Taxi Driver, Polanski’s Repulsion and of course, Frankenstein. It’s also interesting to hear about the great deal of sequences that came together during reshoots and the editing process. They spend a lot of time talking about production designer Leslie Keel and composer Jaye Barnes-Luckett who appear on the second commentary track that is thus rendered somewhat moot.
Posted by Jay Clarke at 12:00 PM