The Lost Reviews are a group of articles I wrote for the site DVDWolf that, for whatever reason, were never posted. This review for the Cujo: 25th Anniversary DVD was originally written in September 2007. 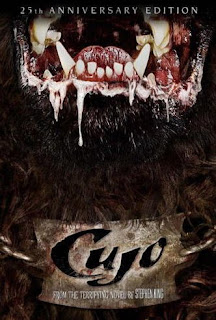 Cujo is the film adaptation of Stephen King’s classic novel about a rabid St. Bernard run amok in a small Maine town.

It had probably been at least ten years since I’d seen Cujo and am pleased to say that it still holds up beautifully. Unlike some previous films of King’s, Cujo utilizes the subplots of the book well and they don’t feel abbreviated or glazed over. The three leads give great performances, especially then five-year old Danny Pintauro. He gives a beyond-his-age portrayal that rivals that of Miko Hughes in Pet Semetary. What I am old enough to fully appreciate now is the brilliance of the dog effects. I had to look into how they performed some of these stunts because they all looked so real. I figured there MUST be some sort of puppetry or animatronics somewhere, but I couldn’t pick them out. It turns out they used a mix of ten dogs (provided by renowned animal trainer Carl Miller), a man in a dog suit and a mechanical dog’s head. I think when it comes down to it, what makes Cujo such a great movie is the reality of it. When it comes to King stories, we have to suspend our disbelief to get behind possessed cars, kinesis (tele and pyro) or haunted hotels, but being attacked by a rabid dog could happen to any of us, at any time. Cujo is an eighties horror film well worth revisiting and one of the best King adaptations out there.

The DVD sports a worthwhile commentary with director Lewis Teague. He covers many aspects of the film, including the many types of fear, his collaboration with Dutch filmmaker Jan de Bont and how his earlier creature feature Alligator prepared him for this project. There is also a three-part documentary called Dog Days. It is mostly Teague reiterating all the stuff he spoke about in the commentary, but there is some really cool stuff about the dogs. Also, there is some interesting talk about how Charles Bernstein scored the film and how much of an influence Jaws was – thematically and musically – on the movie.