The Lost Reviews are a group of articles I wrote for the site DVDWolf that, for whatever reason, were never posted. This review for Captivity was originally written in July 2007. 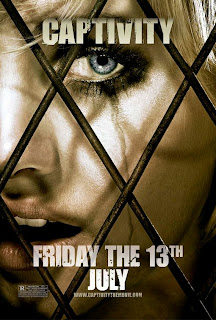 A model (Elisha Cuthbert) is kidnapped, imprisoned and tortured by an unknown captor. When she discovers a man in the cell next to her, they plot to escape.

After the billboard advertising scandal, the bad word-of-mouth and the studio pushing it back twice – which should be enough to tell you they had no idea what to do with this thing – Captivity was finally released on Friday the 13th. Even after all the negative things I’d heard about it, I figured it couldn’t possibly be as bad as they say… could it? The answer is no. It’s much, much worse. Have you ever seen a movie that is SO awful, that it actually swears you off movies for a short period of time, so your mind and body have time to recoup? Well, after this movie I spent the next few days catching up on my reading. Captivity is predictable, repulsive and just plain empty. The people behind this movie would have you believe this is not ‘torture porn’, but a psychological thriller. If this is the case, where are the thrills? The death of this subgenre has been in motion since Hostel Part II’s dismal returns, but now I think it has been cemented. Captivity is so wretched, that calling it a Saw-rip off is an insult to that franchise, which I don’t even hold in that high a regard to be honest with you. Elisha Cuthbert was really the only draw for me. Like Vacancy (with Kate Beckinsale) before it, there was some emotional attachment involved, but that being said, Captivity makes Vacancy look like the best film ever made. I don’t know what sequence of events led to you being cast in this dreck, but Elisha… you need to fire your agent. This material was so far beneath you, it hurts me to think about it. Captivity is just a mess and everybody involved should be ashamed of themselves. I could go on, but I think I’ve gotten my point across.
Posted by Jay Clarke at 12:00 PM