The Lost Reviews are a group of articles I wrote for the site DVDWolf that, for whatever reason, were never posted. This review for Skinwalkers was originally written in July 2007. 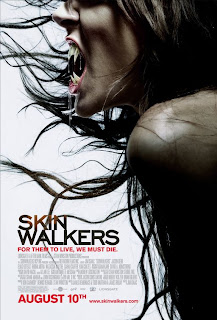 A twelve-year-old boy may be the key to ending a werewolf curse that two clans have lived with for generations. One group wants the curse to end and the other, who consider their supernatural powers a gift, wants it to continue.

Skinwalkers is a bad movie, but in a way that is actually entertaining in some parts. The film has some interesting ideas, they just weren't executed well. The clichéd dialogue is what really bogs the movie down I think. Normally, that wouldn’t be a problem for me, but wedging these pseudo dramatic scenes in between ridiculous over-the-top shootouts – one of which, in a small town main street, had the audience howling (pardon the pun) – just doesn’t fly. That shootout scene though was actually a highlight. The villains are walking down the street loading their guns (which had to be cocked for effect at every opportunity) for what seemed like a minute of screen time and when the shootout begins, everybody in the town suddenly has an arsenal of firearms at their disposal. The shopkeeper, the mailman, the nanny, EVERYONE! It is hilariously absurd and exactly the kind of thing Hot Fuzz spoofed earlier this year. On the subject of guns, this movie again brings up one of the fundamental problems I had with the first Underworld film. There is tons of potential for some awesome hand-to-hand combat in Skinwalkers, but what do they do? All the characters spend most of the movie shooting at each other. It just seems like such a waste. Though I wasn’t crazy about the creature design itself - but at least they were WEREWOLVES, hello Blood & Chocolate are you paying attention? - the makeup effects were really well done, especially on head villain Caleb (Jason Behr). Even when legend Stan Winston works on a stinker - Darkness Falls is another example – you can always count on the quality of the monsters. There was ample opportunity for gore in Skinwalkers, but it looks like the decision for a PG-13 release was made early on. This is disappointing because taking the carnage out of a werewolf movie is rarely a good thing. Despite its many flaws, Skinwalkers managed to corral an impressive amount of familiar faces. In the first act, it seemed that every time a new character came onscreen, I was like ‘Oh, that’s so and so from wherever’. I’ve seen a lot worse, but Skinwalkers really doesn’t do anything for the werewolf genre or horror in general for that matter.
Posted by Jay Clarke at 12:00 PM