Back To The Swamp. 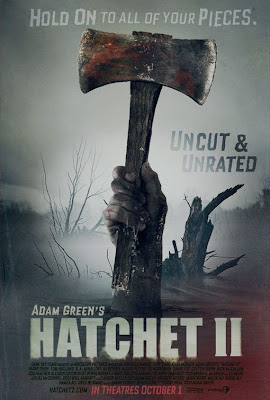 After surviving her first encounter with Victor Crowley, Marybeth (Danielle Harris) re-enters the swamp with local tour boat owner Reverend Zombie (Tony Todd) and a group of hunters to seek revenge for the death of her family.

Going into Hatchet II, I was expecting at least something on par with the original, but unfortunately, this was not the case. On the surface, it seems the offers the same goods, but there are several things missing. It does deliver on the gore set pieces - and director Adam Green should be applauded for releasing this movie unrated - but the effects themselves are not of the same quality and this is no doubt due to the absence of makeup man John Carl Buechler. He reprises his role in the film's opening as pee-drinking hermit Jack Cracker, but that is as far as his involvement goes and that is a big loss. Even Victor Crowley's look seems inferior this time around. Though this sequel apparently cost more, it somehow looks a little cheaper than its 2007 predecessor.

Hatchet II takes a really long time to get going. After the opening credits – which feature the classic track Just One Fix by Ministry – there is a lot of setup before we get back to the swamp. If there had not been a flashback scene of Crowley dispatching random victims, it probably would have been a good thirty minutes without any blood at all. I wasn't bored during this build-up, but I was definitely aware of it. Looking back at Hatchet, the pace is actually similar, but the combination of better dialogue and actually caring about the characters made that preamble a lot more enjoyable. The back story of Hatchet II was at least interesting and let Kane Hodder flex his acting muscles more than I think we've ever seen before, which was a nice surprise. There is also some fun to be had picking out all the references that Green cleverly laces into the film throughout. 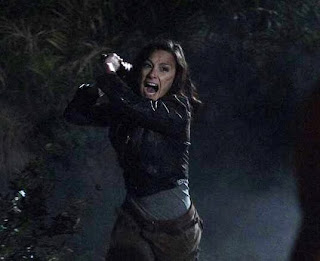 I think the biggest problem here is that Hatchet II serves up very few likable characters. I can guarantee you will be counting the minutes until Vernon (Colton Dunn) meets his inevitable end. Danielle Harris (replacing Tamara Feldman from the first movie) is fine, but her character is just not as strong as the one I saw her play just a few weeks ago in Stake Land. AJ Bowen adds another horror credit to his résumé and director Tom Holland appears as Marybeth's Uncle Bob.

Ultimately, slashers are my bag, so as with zombie flicks, I'll always enjoy them on a base level, but the magic I experienced with the first Hatchet was just not present here. After Green's solid effort Frozen, I can't help but feel this is a step back.
Posted by Jay Clarke at 11:37 AM

Amazing! Thhis blog looks just like my old one! It’s onn a totally different subject but it has pretty muh the same ?age layout and design. Superb
choice of colors!

Hello! I simply wish to offer you a big thumbs up for the great info you have here on this post. I am coming back to your web site for more soon.