Recently, I checked out an Australian indie from last year called Storage. 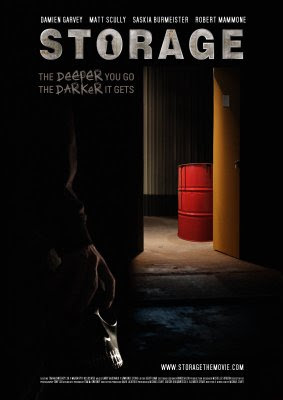 After Jimmy's (Matthew Scully) father is killed during a robbery, he goes to live with his Uncle Leonard (Damien Garvey) and gets a job at his underground storage facility. On his first day, he gets a little too curious about a suspicious customer and trouble ensues.

Storage is a good little flick and one where I never knew quite where it was going. While it started off like many horrors I've seen before – with a child losing a parent – it quickly became unclear just what kind of movie I was watching. When Jimmy was being shown around the storage facility I got a definite Return Of The Living Dead vibe, but ten minutes later, a perfectly alive antagonist was introduced. Then soon after that, it took me down a side path. Truth be told, even when its true intent was finally revealed, Storage still managed to surprise me. Now, having said that, keeping its cards as close to its chest as it does is a strength and a weakness. It is slow to be sure, but it always kept me engaged with solid performances and a simple narrative. It requires a little patience, so if you're just in it for the bells and whistles, well, another Saw sequel will be along shortly for you. 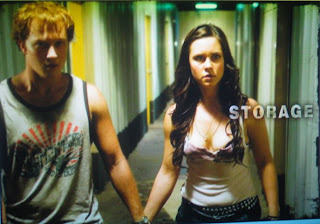 After watching Storage, I was reminded of another thriller that I saw last year called The Disappearance of Alice Creed, which I believe is actually getting a limited release imminently through Anchor Bay. In terms of story, they bear no resemblance, but they are both solid thrillers that boast very few characters and always keep you guessing as to where they are headed. This is a rare thing these days and makes seeking out these indies worth enduring the disproportionate number of stinkers in between.

I don't know if and when Storage will end up on your video store shelf, but if it ever does and you're in the mood for a story-driven thriller, you now know that – for what its worth – it has my endorsement.
Posted by Jay Clarke at 7:40 AM

"In terms of story, they bear no resemblance, but they are both solid thrillers that boast very few characters and always keep you guessing as to where they are headed."

Yes, really enjoyed that one too.

Sounds like another good one. You seem to have the ability to separate the gems from the garbage.

I wish, I just tend not to mention the bad ones, unless they're reaalllly bad!