Another recurring actress during my formative years was Barbara Crampton. It should come as no surprise that she made an impression on me, considering some of her more memorable roles. Whether she was getting “head” in Re-Animator, losing it in Chopping Mall, or being slimed in From Beyond, she always seemed game to assume any precarious position.
I would also imagine that her regular appearances in Full Moon fare like Puppetmaster, Castle Freak and Trancers II was another reason why her and my VCR would often cross paths. 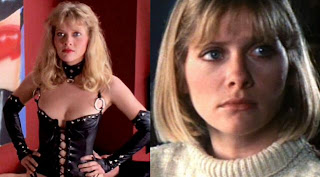 Crampton as Dr. McMichaels in From Beyond (left) & as Megan Halsey in Re-Animator.
Originally from New York, Crampton's desire to be a performer likely sprung from growing up on the fairgrounds of the travelling carnival for which her father worked. Her career began in the early eighties on Days of our Lives, and over the course of her career has appeared on four other soap operas.
Ms. Crampton was one of those Scream Queens (like Kathleen Kinmont & Elizabeth Kaitan) that I thought I'd never get to see in person, but fortunately, her appearance in Adam Wingard's recent home invasion slasher You're Next brought her to Toronto last September!
Posted by Jay Clarke at 10:02 AM

I love Barbara Crampton. Anyone who can bring even an iota of sexiness to an H.P. Lovecraft story deserves my undying affection (pun intended).