The Thing That Wasn't There. 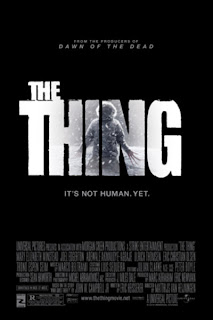 My knee-jerk reaction when The Thing remake was announced, was, of course, disgust. However, when I later heard that it was going to be a prequel of sorts, covering what happened to the Swedes... er... Norwegian camp, I thought it could be interesting. But, was it just going to be a bunch of Hollywood actors with faux accents? Apparently not. Director Matthijs van Heijningen Jr. went out and cast a bunch of Norwegian actors to compliment the American researchers in the film. The casting of Mary Elizabeth Winstead as the lead was no problem for me either, because well... I kind of love her.
But most important were the effects. John Carpenter's The Thing is basically the pinnacle of practical effects and even after all these years, they still hold up. What would be the point of making another Thing movie if you're just going to sully it with computers? But, Heijningen insisted that with the help of effects company Amalgamated Dynamics, The Thing 2011 would have as many make-up effects and animatronics as possible. This made me happy.
So, going in I was cautiously optimistic. It could never top the perfection of the original, but if done right, it could at least be a good companion piece or a solid bit of fan service, like Computer Artworks' 2002 video game was.
So, yeah, they lied. I don't how much of the old fashioned stuff was used on set, but a lot of it got replaced with CG in post. And it only gets progressively worse as the movie goes on. So, what happened here? Someone decided that they weren't good enough? Even if that was the case, are you telling me that the best & brightest couldn't come up with something that at least approached what Rob Bottin and his team came up with THIRTY years ago??? Universal surely could've thrown some money at this to get it done right and it would have still been half the cost of The Wolfman. 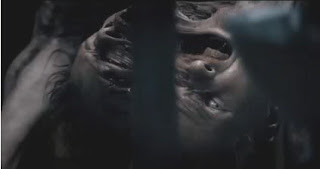 A familiar face (to two)
You know what the real shame is though? The Thing 2011 is what I would categorize as being 'almost great.' Despite all the buzz-killing CGI, I actually liked this movie. I really got the sense that they were genuinely trying to make a good film here. Heijningen meticulously recreated the Norwegian camp glimpsed in the 1982 film and made sure everything matched up to what Carpenter's crew found during their visit. A lot of the nagging questions that I brought into the theater with me were explained away early and I was in it.
A lot of people were put off by the announcement of a female lead – a move in direct contrast to the boy's club of the original – but I felt the role of Kate Lloyd was not only justified, but Winstead also put in a strong performance. I had heard that Kate's character was modelled after Ripley of the Alien franchise and I can see that. The influence of Aliens was also present in other areas, as well. The character of Sander (Ulrich Thomsen) had shades of Paul Reiser's Carter Burke and there was a shot during the climax reminiscent of the Alien Queen's first appearance. 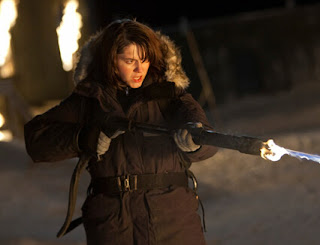 The ensemble as a whole was nowhere near as dense and fleshed out as the original though. You get very little interaction with some of them before shit goes down and since many of them are bearded men with Norwegian accents, it's sometimes a little hard to tell them apart. The underlying sense of paranoia was still present, but I didn't think the language barrier was mined as effectively as it could have been. The story was still slick enough to keep me invested though.
The Thing was a frustrating experience, but still a somewhat rewarding one. I couldn't ignore the voice in the back of my mind constantly droning 'cee-gee-cee-gee-cee-gee', but at the same time, that was pretty much the only substantial misstep here. Now, if you'll excuse me I think I'm going to go watch “Terror Takes Shape” and revel in the good old days before Hollywood's digital crutch.
Posted by Jay Clarke at 7:47 AM

I went on Saturday to see this.

I agree that I think they set out to make a good film.

(No Spoilers) But I gotta say, my favorite part of the movie was the last 60 seconds. And only because it made me want to go watch Carpenter's version.

I just read this article on BD that interviews the screenwriter and explains some of the reasons things happened how they did:
http://www.bloody-disgusting.com/news/26758

Yeah, the ending was pretty cool. And I watched Carpenter's again the very next day...

Thanks for the link, that cleared a lot of things up. I guess I shouldn't be surprised that the 'test' audiences were as much to blame as the suits.

I haven't seen the 2011 version yet but it's interesting what you wrote about Kate Lloyd as the lead given that the plot in The Thing From Another World is oddly driven by a female (the secretary). I'd be pretty interested in a three way comparison of those movies. Great write up, it makes me (sort of) looking forward to seeing it!

Interesting, I hadn't thought of that. Good observation!

Can't say this film was scary at all, Jay-dog. And yeah, it's sad that creature effects haven't really peaked since the original remake all those years ago.

Some day maybe the digital artists will be able to better replicate realistic time and space, but too many effects are just showy, and for lack of better word, lack gravity.

I can only imagine that the time and cost of practical effects are too prohibitive now, and perhaps a lack of expertise as well.

Carpenter's movie must have been mind blowing when it came out, but are any of us surprised with what the prequel turned out to be. The only interesting stuff was the background exposition.